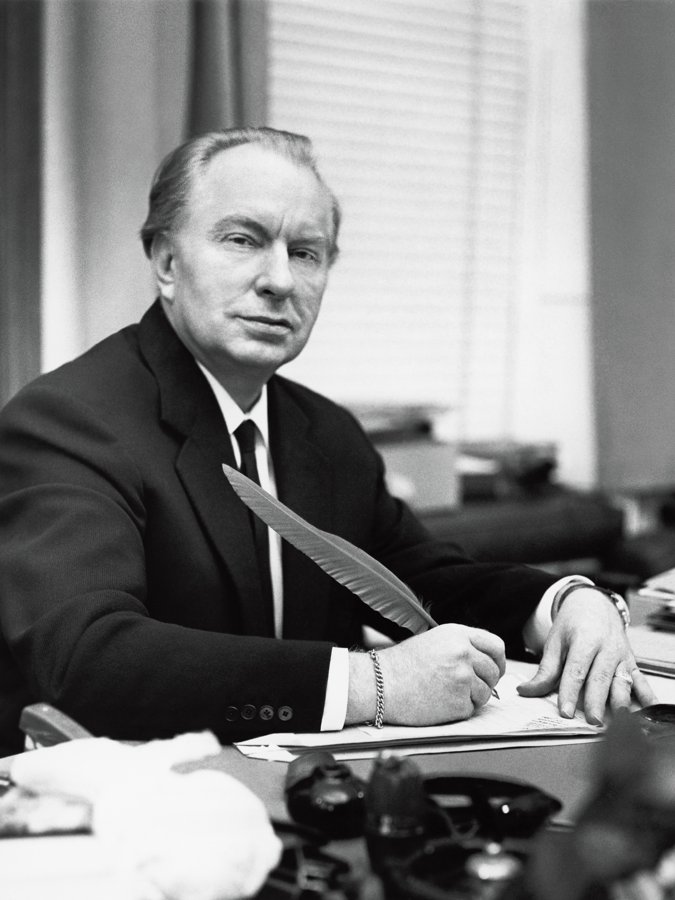 L. Ron Hubbard is perhaps best known as an author and as the Founder of the Scientology religion. His works are published in 52 languages with hundreds of millions of copies in print. Yet he is also remembered by millions as a great humanitarian who, after more than half a century of research into methods to better the human condition, left a legacy that improves lives in innumerable ways. This legacy is recorded in an immense body of work that literally comprises tens of millions of words.

Born in Tilden, Nebraska, on March 13, 1911, Mr. Hubbard spent his early years in what was then still the frontier territory of Montana. Possessed of a rare curiosity, one that motivated his ethnological examinations of 21 races and cultures and encouraged him while still in his teens to trek across a then-remote China that few Westerners would ever see, he logged more than a quarter of a million miles by the time he reached the age of 19 without the benefit of commercial air transportation.

By the time he enrolled in George Washington University in 1930 to study engineering, it was obvious that he had already embarked upon his life’s work: a search for solutions to man’s most perplexing problems, and the creation of workable technologies to improve all facets of life.

While the full array of his accomplishments in these early years could fill a book, there are some particularly fitting to mention here.

His interest in education and the problems associated with passing on knowledge began early. At the age of 15, he was teaching Chamorro children in Guam, utilizing unique methods he developed – a harbinger of breakthroughs he would make in the field of education and study. Then, while in the U.S. Navy during World War II, Mr. Hubbard trained ship crews and developed some of the techniques of pre-battle conditioning still used today, turning incomprehensible technical manuals into effective course materials to train servicemen in navigation.

By 1950, he noted that “Today’s children will become tomorrow’s civilization,” and warned of a society that was destroying itself by its own educational systems – a prediction that has proven nightmarishly accurate. No armchair philosopher, Mr. Hubbard worked to resolve these problems as they escalated into crises through the years. His accomplishments included a considerable body of work which became known as his Study Technology. It contains his discoveries of the basic reasons why students fail to grasp a subject, and the barriers to full comprehension of what one is studying. He developed methods by which anyone can improve their ability to learn and apply what they have studied. Today, his Study Technology is used in schools throughout the world and is a major factor in the success of the Hubbard College of Administration, which utilizes it fully in all courses to the benefit of its students.

Likewise in 1950, realizing that what passed for administration at the time was inconsistent and arbitrary, Mr. Hubbard turned his attention to that area. His first book on the subject, How to Live Though an Executive, published in 1953, recognized that the true role of an executive in any organization was to plan and supervise, and detailed a communication system for any office or organization. Indeed, the book was a communication manual appropriate for any organization of any size. Three years later, his book The Problems of Work isolated the problems encountered on the job by everyone, from worker to chief executive officer, and presented methods anyone could use to regain his or her enthusiasm for work.

In 1965, after years of continued research into the forms and functions of organization, Mr. Hubbard announced his development of the Seven-Division Organizing Board, a major breakthrough that presented the most successful administrative pattern of operation for any group of any size. These seven divisions, which are further divided into departments, encompass all the actions that are performed – or should be performed – in any organization. Indeed, this organizational breakthrough when applied, ensures the continued success and stable expansion of any organization.

The full body of his work in this area can be found in nine encyclopedic volumes comprising the Organization Executive Course, plus three Management Series volumes. Contained in this twelve-volume set is technology that guarantees the survival and growth of groups from small to enormous, as has been proven by thousands upon thousands of companies and groups in countries throughout the world in recent decades. 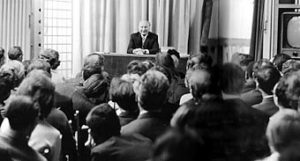 After completing his work, L. Ron Hubbard departed this life on January 24, 1986. He accomplished all he had set out to do and his legacy continues to impact on the lives of millions. Mr. Hubbard once said, “I like to help others and count it as my greatest pleasure in life to see a person free himself of the shadows which darken his days.“

Today, millions in many fields utilize Mr. Hubbard’s principles to rid themselves of those shadows – and lead better and more productive lives as a result.

“Man’s happiness and the longevity of companies and states apparently depend upon organizational know-how.”